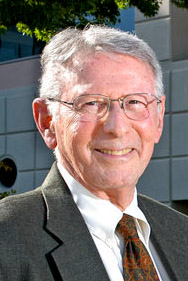 Dr. Paul Berg is Cahill Professor, Emeritus in Biochemistry and Director Emeritus of the Beckman Center for Molecular and Genetic Medicine at Stanford University School of Medicine.

Berg received his undergraduate education at Pennsylvania State University, and earned his Ph.D. in biochemistry from Western Reserve University in 1952. He has served as Co-Chairman of the National Academy of Science Commission on Life Sciences and is a Director of the Foundation for the National Institutes of Health.

His honors include the Eli Lilly Award in Biochemistry (1959), the California Scientist of the Year (1963) and the Henry J. Kaiser Award for Excellence in Teaching (1969, 1972). In 1980, he received the Gairdner Foundation Award, the Albert Lasker Medical Research Award and the Nobel Prize in Chemistry for his studies of the biochemistry of nucleic acids, particularly recombinant DNA. Berg was elected to the National Academy of Sciences (1966), The French Academy of Sciences (1981), The Royal Society, London (1992) and was awarded the National Medal of Science (1983).

Dr. Berg's research used biochemical and molecular genetic approaches for the analysis of gene expression and recombination. He continues to be actively involved in the public policy debates in Congress and elsewhere concerning embryonic stem cell research and therapeutic cloning.