Celebrating One Year of the BGTC

a year in which public and private partners joined in a groundbreaking effort to make gene therapy more accessible by creating a platform approach to deliver novel therapies for many different rare genetic disorders.

On October 27, 2021, the Foundation for the National Institutes of Health (FNIH) formally announced the launch of AMP BGTC, the first AMP initiative focused on rare diseases and the eighth of now ten AMPs overall. Today, as we celebrate this profound partnership's one year anniversary, we reflect on the first year's successes, and look forward to the achievements we'll accomplish in year two and beyond.

With 35 public, private, and non-profit partners, the BGTC is the largest AMP initiative to date, and strives to leverage the strength of this enormous partnership and over $81 million in committed resources to shine a brighter light on ultra-rare diseases and ultimately benefit the patients and families of those dealing with these diseases.

One year into this six-year initiative -- where are we?

Shortly after launching, we issued RFPs for AAV biology research and initiated the disease nomination process. In July, we announced the final 14 disease candidates eligible for clinical trial proposals and re-issued the AAV biology RFPs for the second round of proposals. Since launch, we also added several new partners, continuing to bolster the already record-breaking AMP program.

With full steam ahead into year two -- where are we headed next?

In year two, we will announce the remaining AAV biology research awards, as well as the final 5-6 diseases selected for clinical trials, and begin manufacturing and preclinical testing.

We are excited about the future of AMP BGTC, and are incredibly grateful for all of our partners and colleagues who joined in this monumental and complex initiative.

Click the video above to view a synopsis of the AMP BGTC program presented by Courtney Silverthorn, PhD, Associate Vice President of Research Partnerships, to FNIH staff on 18 October 2022 (15 min). 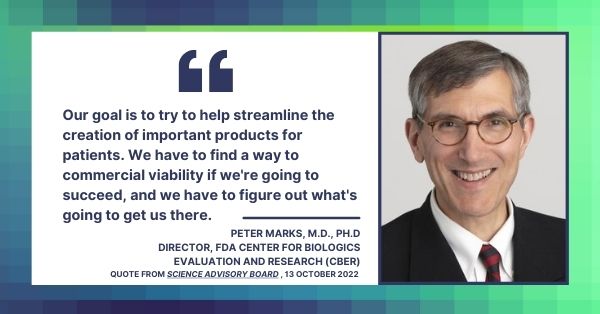 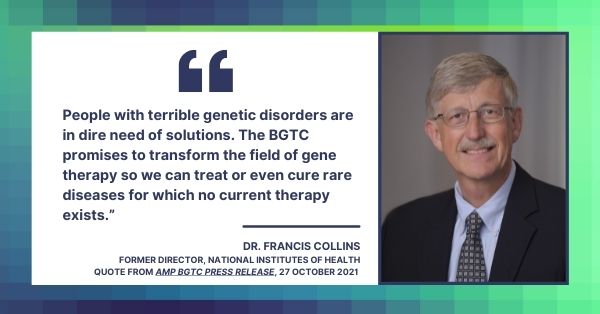 Updates from the Subteams

The AAV Biology Subteam issued 4 RFPs aimed to develop a deeper understanding of AAV biology to enhance therapeutic gene expression and vector production.  We received 20 proposals which were reviewed by an expert team of AAV biology scientists. To date, we have issued one research award and would like to welcome the Telethon Institute of Genetics and Medicine (TIGEM) to our research partnership. TIGEM is a leading Italian research center, extending the BGTC’s international presence. We anticipate that up to 10 additional research awards will be announced in year two.

The Communications Subteam developed materials to promote BGTC’s efforts, such as one-pagers, the disease nomination review process fact sheet, and a resource sheet for Patient Advocacy Groups. We announced new members, promoted RFPs via social media and grew our newsletter membership to over 200 recipients. BGTC was mentioned extensively at the American Society of Gene and Cell Therapy (ASGCT) annual meeting, including Dr. Francis Collins’ keynote address, and hosted a booth at the National Organization for Rare Disorders (NORD) Breakthrough Summit. Several articles have been published noting the BGTC, including the PharmaVoice profile and PharmaTimes article written by our BGTC member and patient advocate Sharon King. In year two, we will conduct our first BGTC Annual Meeting in conjunction with ASGCT’s 25th Annual Meeting in Los Angeles on May 16-20.

The Pre-Clinical Subteam was established midway through year one to develop consensus proposals for the pre-clinical testing of AAV gene therapy products. Several prominent scientists in the AAV gene therapy field have attended working sessions to share their experiences with preclinical testing in support of Phase 1 IND applications to the FDA. These valuable insights will contribute to the development of the draft consensus proposals, which will be completed and presented to the FDA in year two.

The Manufacturing Subteam developed a draft consensus proposal to create a platform approach for analytical testing of our selected AAV gene therapy products. This draft consensus proposal was presented to the FDA and discussed in an informal meeting. In year two, the team will select manufacturers to support the BGTC’s clinical trials, begin manufacturing, and support pre-IND engagements for the selected diseases. 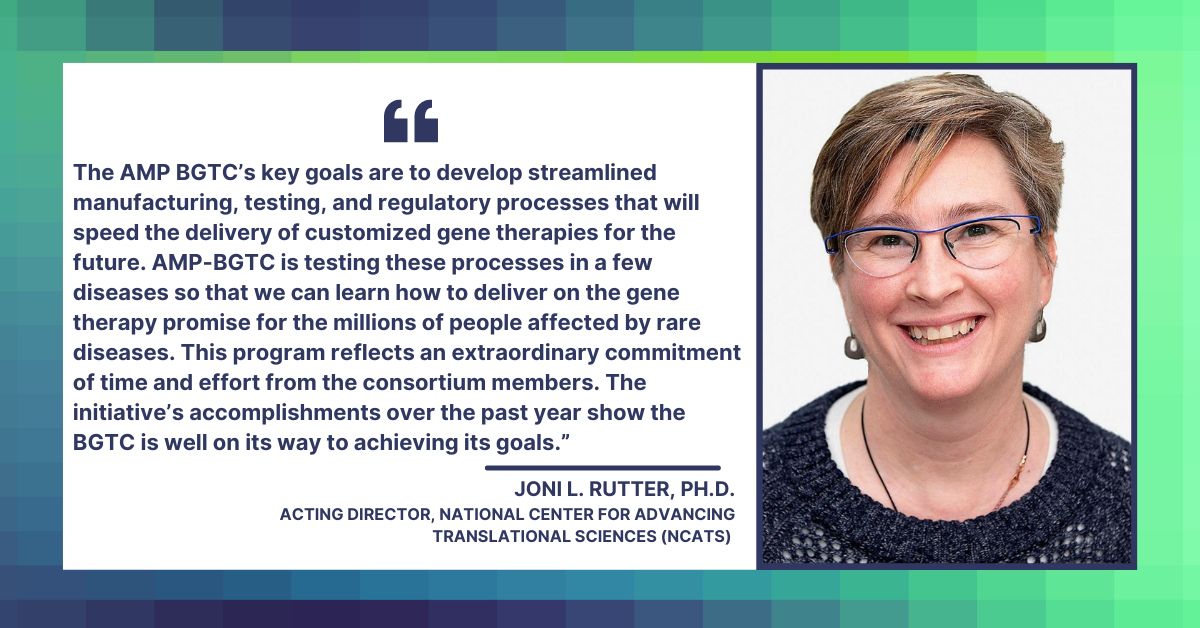