Dr. Joram Piatigorsky and his wife Mrs. Lona Piatigorsky have established an endowment to award annually eye and vision scientists doing basic research exploring little studied species and imaginative ideas. Managed by the Foundation of the National Institutes of Health (FNIH), and bestowed at the National Eye Institute (NEI) of the National Institutes of Health (NIH), the Piatigorsky Basic Science Lecture and Award aims to bring attention to notable basic science advancements by researchers in vision and the eye that will help accelerate downstream research by scientists in such fields as genetics, developmental biology, and computer science. 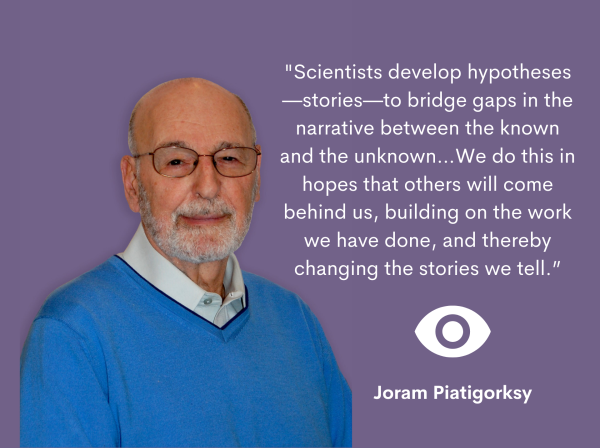 A molecular biologist and eye researcher who in 1981 founded the Laboratory of Molecular and Development Biology at the NEI, Dr. Joram Piatigorsky served as its chief until 2009. There, he established the concept of gene sharing on the basis of the institute’s research on lens crystallins in various vertebrates and invertebrates, such as scallops and jellyfish, that even few knew had an eye. He generalized and extended the gene sharing concept, an example of basic research focused on the eye with applications to genetics, development, and evolution in general. Now retired, Dr. Piatigorsky retains the title of Scientist Emeritus at the NIH.

The endowment’s inaugural awardee, chosen by a panel of esteemed basic scientists from NIH and top universities, is Dr. Dan-Eric Nilsson, professor at Sweden’s Lund University. A renowned researcher and lecturer, Dr. Nilsson co-wrote Oxford University Press’ Animal Eyes, a biological study that explores the evolution and science behind not only human eyes, but those across all animal phyla. Dr. Nilsson is a fellow of the Royal Swedish Academy of Sciences and head of the Lund Vision Group.

Dr. Nilsson will receive a generous award and present an NIH-wide lecture at NEI on April 11, 2023. He will also meet with scientists at the NEI and other NIH institutes, and offer a laboratory seminar for trainees.

According to Dr. Piatigorsky, his “research on the eye and vision, as well as its general significance in biology, epitomizes the basic nature of this Award, and his experience presenting his research to wide audiences sets him apart.”